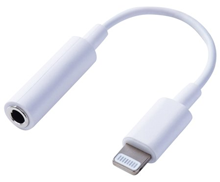 Most amps have an MP3 or auxiliary input that uses a 3.5mm plug. Use this to connect your smart phone or iPad to the amp. The amp will control the volume of your guitar and your phone or iPad will control the volume of the backing track. (Apple did away with the headphone jack starting with iPhone 7, but you can purchase an Apple Lightning to 3.5mm headphone jack adapter like the one shown here.)

"Free improvisation, in addition to being a highly skilled musical craft, is open to use by almost anyone – beginners, children, and non-musicians."— Derek  Bailey

Start your A minor backing track and play the following stepping squares. I've included an initial sequence of notes to get you started, but feel free to play the notes in any order, skipping some, or repeating others.

If you lose your place just start over. The sequence ends on the 12th fret. If you end on the 11th fret, you probably forgot to do the B string shift. Start on the 5th fret of the low E string. This note is an A, so you're playing an A minor pentatonic scale.

Now try the same sequence in reverse order starting on the 12th fret of the high E string.

You can also move this pattern to a different string. Below I've started on the 7th fret of the A string in the key of E minor.

"It’s easy to play any musical instrument: all you have to do is touch the right key at the right time and the instrument will play itself." — Johann Sebastian Bach

Slow Groove is a Good Groove

In 1981 John Moschitta Jr., also known as "Motormouth" did a famous commercial for FedEx. John can speak 586 words per minute. Some people play guitar like that: They never change their speed or pause to catch a breath. Listen to B.B King. He's famous for his slow groove. As a beginner you know how to play slow and like B.B King, you're "horrible" with chords.