You can side-step from any gray corner note.

Starting from the 12th fret of the high E string, we can side-step to row 3 of a new square. Rows 1 and 2 of the new square are shifted back one fret because we're moving from the B string to the G string.

The sequence above ends on the 12th fret of the D string. It's an orange corner note. We can't side step from that note, but we can move a narrow interval to the left or right and side-step from those gray corner notes.

The orange note (D12) overlaps another square. You can play the notes in that square and eventually side-step your way back to the start.

This next exercise demonstrates stepping squares, side-stepping, B string shifts and the use of open strings. Notice when you side-step from the G to B string the note on the B string is right below the one on the G string. That's the B string shift again. 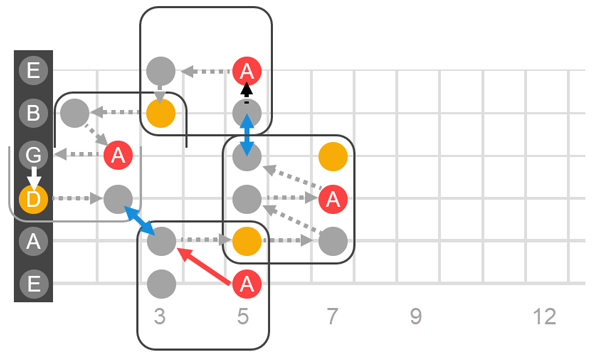 Here is the same sequence expressed in tabs. The numbers are the frets, the lines are the strings and zeros are open strings.

Tabs are easier to follow and less complicated than my illustrations, but they don't give you a picture of the underlying structure. In a later section I'll show you how to convert tabs to Freedom Block pictures. You'll need this because most guitar licks are written in tabs. 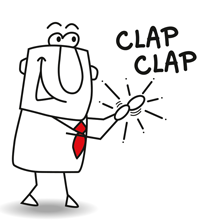 You're now able to play every note in any minor pentatonic scale while moving over the entire fretboard. Side-stepping allows you to jump between groups of Stepping Squares and never run of strings to play. In the next section, you'll learn how to use rectangles to jump between squares, but don't forget side-steping. It's one more way to add variety to your soloing.

"To play without passion is inexcusable!" — Ludwig van Beethoven

Here are some variations you can use to add more passion to your soloing:

So far we've relied on stepping squares and side-steps to move around the fretboard. Right in the middle of the squares are rectangles. They provide a bridge between squares. They add variety with their wide intervals and they contain the two notes that we removed from the natural minor scale to get our pentatonic scale. 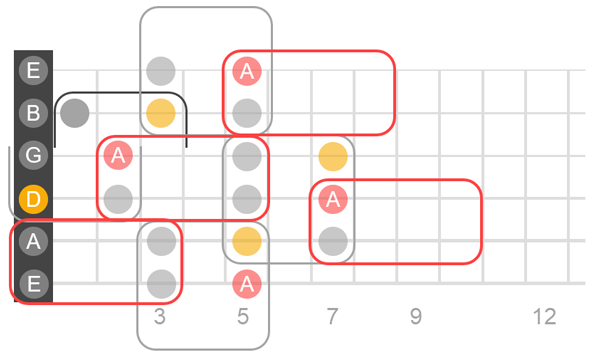 More about rectangles in the next section. Right now, let's review what we've learned about Freedom Block squares.

Here is everything you've learned so far about Freedom Block squares. Give yourself a high five! 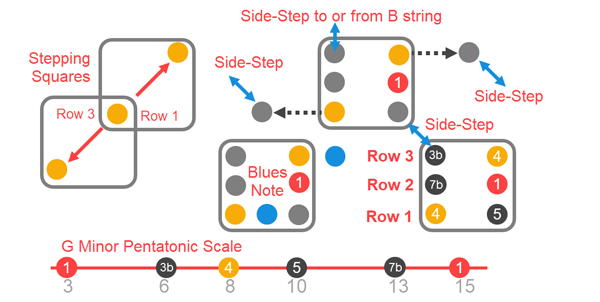 "The only thing that makes one scale different from another is not the starting note, it's the separation of intervals." — Allan Holdsworth