Moving between squares is easy because squares overlap each other's orange corner notes. Can you see why I call them stepping squares?

Notice a feature of the orange notes: They always have a narrow interval (2 frets) on either side of them.

Those intervals are part of additional stepping squares.

Here's an example that starts on the 5th fret of the low E string. Ignore the high B and E strings for now. Try playing this sequence in both directions.

Playing with a Pick

Starting out it's easier to strum with your thumb. You can feel the thickness of the strings and your brain knows where the end of your thumb is. It doesn't know where the end of your pick is. If that's a problem try moving your picking hand up the neck of the guitar until it's about five frets below your other hand. Your peripheral vision will tell you which string you're on.

Next play the stepping squares in reverse. Notice that you have to shift back one fret when you leave the B string. You're starting on the 12th fret of the high E string. 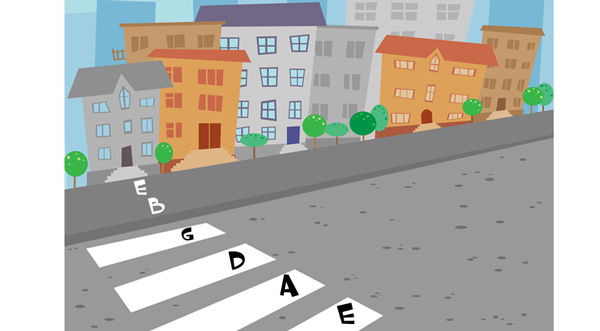 "A guitar is just theoretically built wrong. Each string is an interval of fourths, and then the B string is off. Theoretically, that's not right, all the strings should be off." — Eddie Van Halen
« Previous
Next »