Rectangles are parasites. They lack notes of their own, so they latch onto squares and bridge the gap between them. In other words, they overlap squares.

Rectangles never overlap orange corner notes. If they did the notes would turn into pumpkins.

Remember IN on the TOP and OUT on the BOTTOM as you move to the right.

Play inside each of the squares below and use the rectangle bridge to jump between them.

Rectangles Crossing the B string

Next, only row 2 lands on the B string. This is not as easy to play. 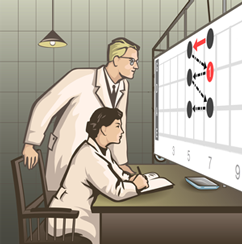 Our scientist are constantly looking for clever ways to move around the fretboard. Here's one of their latest discoveries that covers 14 frets and three octaves. Have fun racing up and down the fretboard. Of course, you can stop and noodle along the way.

Here are a few more stopping off places. Take it up a notch and jump on the B and E strings.

"The guitar has a kind of grit and excitement possessed by nothing else." — Brian May

No Guitar — No Problem

You can practice anytime even if you don't have your guitar. That's right, you can improve just by thinking about it. A famous study conducted by Dr. Biasiotto at the University of Chicago found that basketball players who spent one hour a day thinking about free throws improved almost as much as those players who practiced with a basketball.