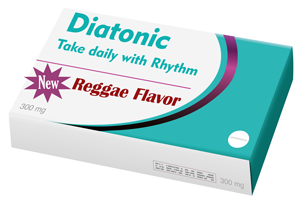 You can easily turn major or minor pentatonic Freedom Blocks into diatonic blocks, by adding two notes to the rectangles. These are the two notes we removed from the major and minor scales to get our five note pentatonic scales.

Rectangles overlap squares on the left and right side. The extra notes are in the same position for the major and minor scales.

You can look at this from the perspective of a square or a rectangle.

NOTE: It helps if you initially practice these Freedom Blocks separately. Play the square with the outside notes, then practice the rectangle with the inside notes. After a bit of practice combine the two blocks. Below is a C major scale.

Here is an A minor scale which has the same notes, because it is the relative minor of C major. I've also included green rectangle outlines to help you see where the extra green notes, outside the square, are coming from.

Now add the two extra notes. Use an F major backing track and listen for the difference the two notes make. You don't have to play every note every time.

Instead of memorizing a two octave stationary shape, you only need to remember two notes in the rectangles. You can switch in and out of a diatonic scale or use the two extra green notes like seasoning— a sprinkle here and a pinch there.